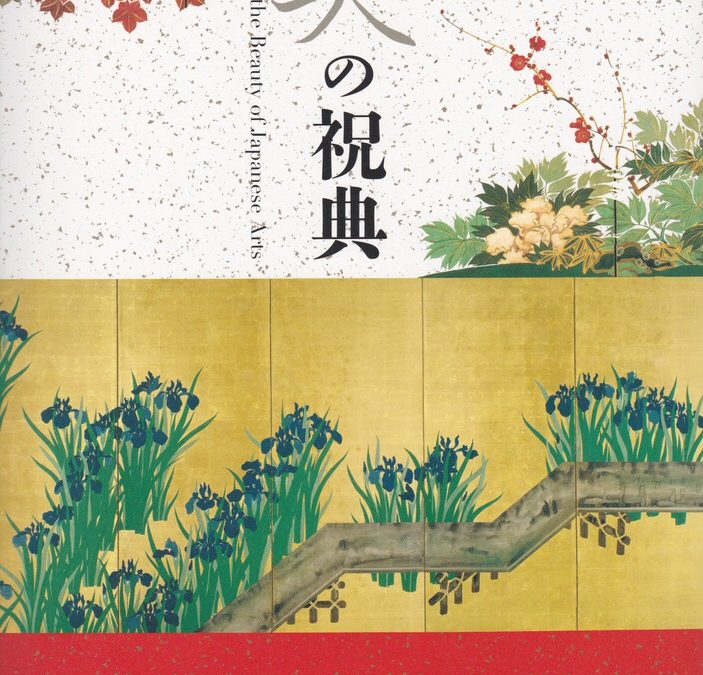 I recently visited the Idemitsu Museum of Art to attend the second stage of the 50th Anniversary Exhibition ‘Celebrating the Beauty of Japanese Art II : Sublimity of Suiboku’. I was grateful for the opportunity to be able to directly compare two works of art, both noted as being by the Japanese Momoyama period painter Hasegawa Tohaku; ‘Bamboo and Cranes’ and ‘Crows on Pine and Egrets on Willow’.

‘Bamboo and Cranes’, originally painted as sliding door panels though now presented as a pair of six-fold screens, is an exceptional work of art that effortlessly demonstrates the misty atmosphere of the finest of Tohaku’s large-scale ink works. The ink-brushed bamboo grove and cranes that are the work’s formal focus are largely partial or indistinct, fading back into the mist, which is the real subject. The profound and contemplative nature of the work is achieved through varying tonalities of ink combined with unerring fluidity of vision and ceaselessly expressive brushstrokes. The cranes are ensconced within their idyllic landscape. It is an ink painting of exceptional presence and tranquility. The work lacks signatures or seals, which is to be expected for sliding doors of the time, yet is very much a masterpiece by Tohaku.

On the wall directly opposite were the screen pair ‘Crows on Pine and Egrets on Willow’. These screens were familiar to me through previous Idemitsu Museum publications though never seen first-hand. They are immediately impressive with the dramatic black crows and dominant pine trunk contrasting against the peaceful white herons and the gentle movement of the willow tree. These screens have become entrenched as part of the accepted Hasegawa Tohaku oeuvre of works, recently forming part of the ‘Hasegawa Tohaku 400th Memorial Retrospective’ exhibition.

The screens are presently unsigned although in the past a seal reading Tohaku was scraped off, and a signature and seal reading Sesshu added. This has also since been removed. The story goes that members of the Kano school, who were in competition with the Hasegawa school, made a concerted effort to eliminate Tohaku’s legacy. This is evidenced by the defacement of this pair of screens and their reattribution to Sesshu. Far more likely it was the work of those who wished to increase the value of the artwork and thought that hitching its future to the illustrious Sesshu was a better bet. Alterations and later attributions are common in Japanese art and are generally attributed to unscrupulous dealers or overzealous collectors. Possibly the heron in flight, which is clearly modeled on works by Sesshu, was the catalyst for the alteration.

Despite such speculation and chicanery the painting clearly lacks the touch of the master. The brushwork is stiff and formulaic. The composition is contrived. The misty atmosphere, which is the hallmark of the master’s work is not present here. The work is planted firmly in the foreground despite the artists’ efforts at depth. The birds appear artificially placed in the landscape, captured and planted for our entertainment rather than celebrating their own world.

Another interesting comparison to make is with the screen pair ‘Crows and Herons’ (Important Cultural Property) Kawamura Memorial DIC Museum of Art, Sakura Japan. There is a very large online image viewable through the link below. It is difficult, if not entirely impossible, to conceive that the two sets of crow and heron screens were painted by the same hand.