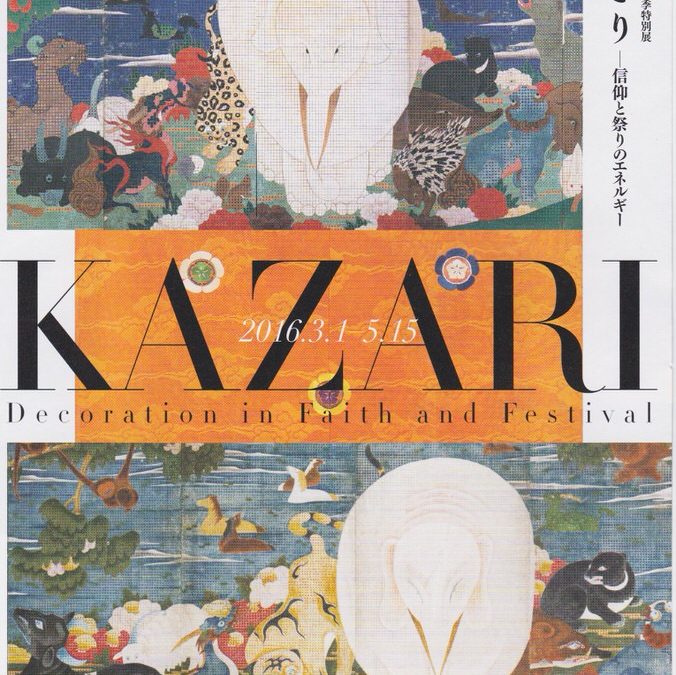 From March 1-13, 2016, the Miho museum afforded the public a rare opportunity to view two famous and closely-related pairs of Japanese folding screens. Highlights of the exhibition consisted of Ito Jakuchu’s ‘mosaic screens’, two pairs of six-panel screens from the Shizuoka Prefectural Museum of Art and the Joe and Etsuko Price Collection, respectively.

In the grand, main display room of this ethereal museum, the two pairs of screens were positioned on directly opposing walls. They were raised on long daises and aligned to the correct viewing height; every square of the polychromatic mosaic screens glistened and was well-lit. With the room abuzz with people comparing the screens, we had to jostle for ideal viewpoints.

The difference between the two pairs was profound. It was hard to quell the immediate perception that they were not painted by the same hand, nor were they born of the same workshop; however, the Price pair appeared strongly influenced by the Shizuoka pair.

Ito Jakuchu’s relatively consistent forms for flora and fauna existed not only throughout his painted works but also extended to his printed works. Within his basic shapes/models, he brought the intricacy of detailing to astounding levels. Jakuchu’s Colourful Realm of Living Beings series epitomises this. Yet, even within these masterpieces, a certain consistency of underlying form regarding the flora and fauna is distinguishable. In the Shizuoka mosaic screens, immediate and consistent Jakuchu forms strike the viewer: the elephant, puppies, monkeys, and the deer. On the left screen, the rooster and phoenix are the most obvious. Jakuchu quite commonly painted elephants and, if we compare those known today, they strongly resemble the elephant on the Shizuoka screen. They don’t wear rugs on their backs to keep them warm, nor to invite someone to sit on them. The puppies are entwined and playful, as is the case in other Jakuchu paintings of the same subject, whereas, in the Price screens, the puppies have been replaced with a porcupine. The Shizuoka deer cranes its long neck proudly and directly skyward, a notable feature in other Jakuchu paintings of the same subject. The Price deer has intriguing gracefulness and intent. Not only is the detailing and colouring of the form simplistic, but the form itself lacks balance and poise. As we continue a similar game of comparison throughout the screens, the results are quite similar.

Viewed in isolation, the Price screens are fascinating and wondrous. They are bold, confronting, and scream Jakuchu. The richness and clarity of the colours demand our attention, as do the creatures that inhabit its world and interact with the viewer.

When I turned to face the Shizuoka screens, my initial impression was differed significantly. Here, the fantastical world of the birds and animals is entirely convincing. The colours are muted and infinitely more diverse and gradated. The world has a sense of three dimensionality due to depth layering techniques that are consistent throughout the work. Elements are effortlessly entwined and naturally interrelated. There is a tangible sense that we are being treated to a peek into a paradisiacal world of birds and animals—I felt the urge to join them. The birds and animals appear to naturally inhabit their own landscape; they have not assembled for our benefit.

The Price Jakuchu screens stand in strong contrast to the Shizuoka Jakuchu screens. The birds and animals lack a sense of belonging to and assimilation with their landscape. Rather than communicating on a natural level with each other, they directly engage the viewer, giving the impression of a combination of individual elements more than a continuously flowing work of art.

In his 2011 book ‘Motto shiritai Ito Jakuchu’, Sato Yasuhiro, a noted Jakuchu scholar, convincingly argues that, while the underlying design of the Shizuoka screens was painted by Jakuchu himself, it was in actuality his students that did most of the in-painting. He also goes on to say that he believes the Jakuchu mosaic screens in the Price Collection were not the product of Jakuchu, or even of his workshop. After a long and highly inspiring viewing of the two sets of screens, it would be difficult to make a convincing case against the views of Sato Yasuhiro.

Enormous images of the Jakuchu mosaic screens held in the Shizuoka Prefectural Museum of Art have been published online and are viewable through the links below. The scale of the gigapixel images is scarcely believable.

In 2006, an incredibly detailed book was published by Shogakukan covering every inch of the Price Jakuchu screens. Its English title is ‘Birds, Animals, and Flowering Plants in Imaginary Scene’.

If you have the opportunity, I highly recommend that you take the time to compare the two works of art.