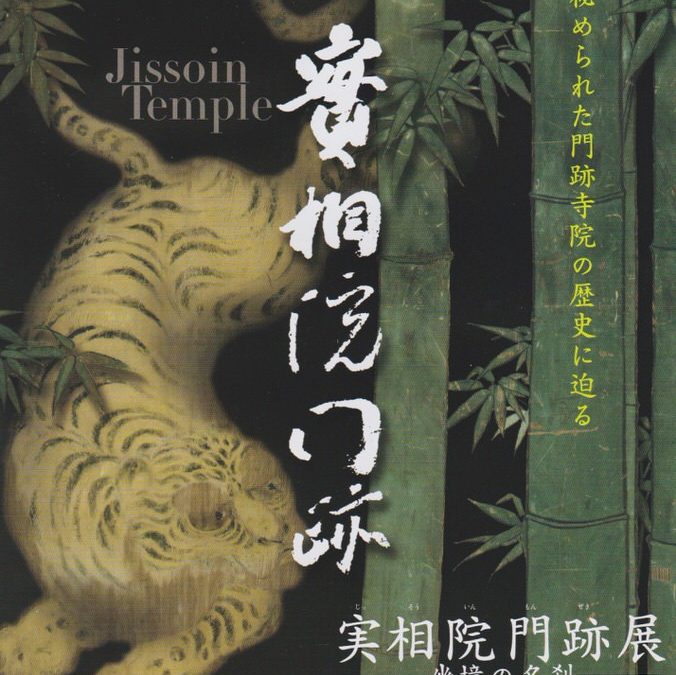 Jissoin temple is a well-known ‘monzeki’ temple located in the north of Kyoto city. The word monzeki denotes temples with strong connections to the imperial family or families of high rank within the samurai feudal system. The first two rooms of the Jissoin exhibition held at The Museum of Kyoto are primarily dedicated to historical documents written by notable figures such as Ashikaga Yoshimitsu and Ashikaga Yoshimichi of the 14th century. An important hand-scroll noting the geneology of Japan’s emperors and a number of temple diaries were also on display. Unfortunately without a sufficient level of ability with the written Japanese language these rooms may prove a little on the dry side.

The two main exhibition rooms are dedicated to the display of the sliding door panels of Jissoin temple. They are all painted by artists of the Kano school of Japanese art. ‘Birds and Flowers’ by Kano Eikei (1662-1702) is the only set firmly attributed to a particular artist and is one of the highlights of the exhibition. He is the grandson of Kano Sansetsu (1589-1651) and undoubtably vestiges of his grandfather’s style remain. ‘Flock of cranes’ is a set of large sliding door paintings, impressive not only for their monumental scale but also for the humour and noisiness of the birds. The cranes are tightly wound in largely separate groups consisting of up to 12 birds. Presumably painted toward the end of the 17th century yet strikingly similar to screen paintings of cranes by Ishida Yutei (1721-1786). Perhaps his teacher or his teacher’s teacher painted them. Earlier in the exhibition was a buddhist painting by Ishida Yutei so his connection to the temple is well established.

Being surrounded on all sides by paintings of such scale and strength is undoubtably the overriding reason to visit the exhibition although they are firmly encased behind glass which is somewhat distracting. It is an excellent opportunity to study the works in a formal sense though almost certainly more fulfilling to experience them in situation at the temple if possible. The photograph accompanying this article is that of a life-sized poster displayed at the entrance to the exhibition. It clearly attests to the beauty of the works in their natural surrounds, something which is slightly lost in translation.

The first half of the show runs from February 20th to March 21st, the second half from March 23rd to April 17th.

The Museum of Kyoto